Greetings, guys everywhere! The Iron Guy is sorry he's been silent for so long but I was away over Spring Break and have been sick since I came back. Between those two things, I haven't had much time to read, so I found this review that I had started in November, right after the World Series of Reading but, due to many circumstances, never posted. It's a great story and there's a terrific audiobook version. So check it out and enjoy!

Boys, here's a review of a terrific book that I read several years ago and never forgot. I remembered it while the World Series of Reading Contest was going on because the World Series and the Brooklyn Dodgers formed an important part of the story. I found a copy of the audiobook, listened to it and remembered why this book had such a lasting impact on me--as it will for you.

The book is In the Year of the Boar and Jackie Robinson by Bette Bao Lord. In this book, a young girl, immigrates from China with her mom to join her father, who moved to America earlier to get a job as an engineer. They arrive in Brooklyn in the late 1940's in the same year that Jackie Robinson plays his rookie year. Her family has been in China for many generations but now the girl, who takes the "American name" of "Shirley Temple Wong" is now in a land of strangers. She doesn't understand their customs and they don't understand hers. She doesn't even speak English--and now she has to go to school in this new country! How will she ever manage? Especially when she runs afoul of the biggest and baddest girl in class?

Guys, this is one terrific read. And one terrific listen! There's a lot of humor here (just wait until you see what happens after she tries to fix the furnace for the apartment building!) and some wistfulness, as when they remember the Moon Festival back in China. But it's also a story that everyone can relate to, especially if you've ever moved to a new school or a new city and wondered how you'd fit in. Plus, after all that this girl goes through, the ending will make you want to stand up and cheer. So will her teacher's speech why being an American and playing baseball are so similar and so important. The audiobook version really makes this story come to glorious life. Narrator Christina Moore captures the tone of this book perfectly, as well as the voices of all the different characters from the Chinese great-relatives to a Hispanic neighbor to the tough Brooklyn kids. Either version is good, so find one or the other. but don't miss out--this story will stay in your memory for years and years.

First day of April greetings, everyone! This is no fooling--I've got three really, really good sports books to tell you about. And what a great time of year for sports! Major League Baseball begins today. The NFL draft comes up soon. Hockey is still going on. I'm sure you've seen your schools' soccer teams play. The NBA regular season is winding down but the NCAA Final Four is on tonight! Of  course, the Iron Guy must maintain his strict impartiality about the Final Four games (Go Tarheels!) but, in the spirit of fairness, I hope that all teams play well (Go Tarheels!!) and may the best team win.

Ahem, as I was saying, I just read a truly terrific book about basketball. It's Legends: The Best Players, Games and Teams in Basketball by Howard Bryant. Wow! What a great book! It's so good that I'm bending one of my rules. I haven't actually finished it--I'm about three-quarters through--but it's so very great that I just have to tell you about it.

Why do we love sports, people? For the same reason we love movies--the drama, the excitement, the fun! In sports, as in movies, there are moments of suspense, dynamic action, and humor. There are unexpected endings and sudden changes in the story. There is the buzzer-beater shot, the impossible catch, the  quick-as-lightning steal or the come-from-behind victory. Sports has dynasties that dominate and underdogs that defeat those dynasties. And sports provide us with a lot of ways to bond. Guys (and girls, too!) have gotten close with their parents, their siblings and their friends through endless discussions about who's the best, why my team is better than yours and what would have happened if...

And nobody captures that drama, excitement and fun better than Howard Bryant. This book on basketball is full of great and terrific stories (plus fascinating facts) such as:

Plus there are facts that I, a long-time basketball fan, didn't know
And, when you're through, you could argue whether Michael Jordan, Wilt Chamberlain or Oscar Robertson was the best player ever. (maybe we could add LeBron James or Steph Curry to that discussion one day)

If you're any kind of sports fan, you need to rush on down to your library and check this out. And if you're  not, you still need to rush on down because you'll find plenty high drama and excitement and fun in this book. Howard Bryant is a very good writer and he's given us one fine book.

Am I excited? You bet! That's why I've given this book (and the other two)--


The Iron Guy Seal of Approval as Terrific Books 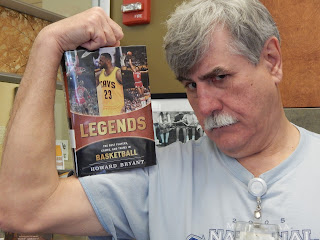