Oh, Yeah! Oh, Ye-ah!! Rick Riordan Does It AGAIN with The Demigod Diaries and The Mark of Athena!!

I've told you before that I'm probably Rick Riordan's # 1 fan in Charlotte and there's a very good reason. It's because he writes fan-tastic books.Actually, now there are TWO more very good reasons and they are THE DEMIGOD DIARIES and THE MARK OF ATHENA, two terrific books!! You want action? You got it! You want suspense that will make your pulse race like a Kentucky Derby horse? It's there. And you want the trademark goofball humor? It's all there!
Take a look:

The Demigod Diaries--There are four stories, written by different demigods in their diaries. Luke Castellan and Thalia get trapped in a decrepit old mansion in Richmond, waiting for a monster to devour them. Percy and Annabeth have to get the cadeuceus, the symbol of Hermes, back from a giant who runs a flea market! Leo Valdez tries to track down his walking mechanical table while dodging the Maneads--the most frightening creatures I've seen yet in a Rick Riordan book. At the end is a story by a guest author--and wait until you find out who it is! All these stories move along and keep you laughing, gasping in suspense and reading, reading, reading. Plus there are cards, puzzles, etc. A true winner! If you haven't already read it, don't waste a minute--go find it at your library or bookstore or get it on your e-reader.

The Mark of Athena--The seven demigods finally set off on their quest to keep Gaea from awakening and destroying the world. Of course, to do so, they must sail across the Atlantic and try to survive what awaits them. If they make it, then they must get past the Pillars of Hercules--and past Hercules himself! If they can do that, then the REAL danger begins in Rome! Annabeth must go on a quest alone to follow the Mark of Athena and recover the Pallas Athena. (what's that? I won't tell you! You gotta find out!) Percy and Jason and Piper must overcome two giants while Leo and Hazel and Frank make an unexpected discovery. Do you think they've faced danger before? Ha! Just wait until you see who Annabeth meets!! Or the underwater trap waiting for Percy, Jason and Piper. And, while this is going on, the demigods from Camp Jupiter are moving across the country to attack Camp Half-Blood. Whew!
If you haven't noticed, there's a lot going on in this book! These are two of the best in the whole Percy Jackson series. There's enough adventure and excitement to satisfy the most enthusiastic or reluctant guy reader. But not only is there action, there's also laugh-out-loud humor. Like when Percy tries to save the quest from half-dolphin monsters by using a can of Diet Coke. Or when they face an evil giant wearing a tutu. And there are very touching scenes as well, like when Hazel finally figures out the connection between her and Leo and Sammy Valdez. And then there's the scene in which Annabeth starts to descend under Rome to find the Pallas Athena. She knows that the chances are coming back alive are extremely slim. She looks up and sees the blue sky framed in the doorway leading underground. She also knows that she can go back up those stairs into the sunshine and be safe. She has a choice to make.What will she do? THAT'S masterful writing, guys!


These books get the Iron Guy Seal of Approval as Two Terrific Books!! 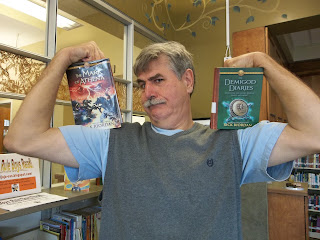 I have to warn you. There is--there is--well, the only way to warn you properly is to make a Public Service Announcement:

Well, you've been warned but you've also been encouraged. Go and get these two fantastic reads!! You will not regret it. And if you've already read them, hit that "Comment" button below and send me a review. We love to hear what reader guys think!
Posted by Iron Guy Carl at 3:42 PM 1 comment: