The Third Really Good Book of the Summer--and What a Terrific Book It Is!

Sometimes, after a great movie or a hard-fought sports game or a truly delicious meal, all you can do is sit back and just say, "Wow. Wow." over and over again. That's exactly how I felt after finishing Realm Breaker, the third and final book in Laurie McKay's terrific trilogy, The Last Dragon Charmer. Wow. Oh. Wow. What a terrific read!

If you've read my review of Quest Maker, the first book, and the review of Villain Keeper, the second book, then you already know what's happening. If you haven't, here's a brief synopsis:

Prince Caden, eight-born son of King Axel of Razzon in the Greater Realms, gets pulled into our world, along with a sorceress named Brynne, and they end up in Asheville, North Carolina. They get taken into a foster home and sent to a school that turns out to be a place of banishment for villains from the Greater Realms. Rath Dunn, the worst of all the villains, has been secretly preparing a spell that would break the barriers between the two realms. But to do so would also destroy Asheville and Razzon. In this book, Rath Dunn puts the four-part spell into motion and Caden and his friends must stop him. Right--a few kids with rudimentary powers must confront the most powerful and cunning villain in the history of the Greater Realms. Could they even hope to win? You won't know unless you read this book! But what a great, fun and amazing ride you'll have. The villains are slick, evil, creepy and unstoppable. The action scenes are thrilling, the characters are people you really care about and the magic scenes are--well, pretty awesome. Not to mention that little-old-lady Miss Primrose turns out to be one of the most awesome and memorable characters I've ever encountered in any fantasy story. And there are flashes of humor too--just wait until you see what happens to Caden in the end! As I've said, this was a great read and I couldn't tear myself away from. I bet you won't either!


Iron Guy Seal of Approval as One Terrific Book! 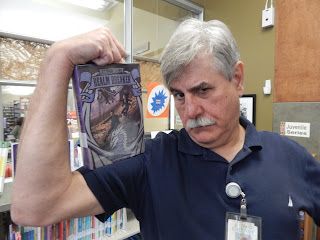 The Second Really Good Book of the Summer (Which Is Also a Second Book!)

Hey, guys, summer is still going on and we have been really busy this year! The Iron Guy has been as busy as a bumblebee after an explosion in a honey factory, so I'm going to give you a quick post today. It's about Quest Maker, the second book in Laurie McKay's terrific The Last Dragon Charmer trilogy. I really enjoyed this!

Prince Caden, eighth-born son of King Axel of Razzon in the Greater Realms, is still stuck in Asheville, North Carolina after being pulled into our world by a mysterious spell. So is Rath Dunn, the most dangerous villain in the Greater Realms, who's been banished here along with a group of other villains who are ruled over (at least for now!) by a powerful Elderdragon. It would take too long to summarize the story, so let me say briefly that the book opes with a bang--literally! A bolt of red lightning appears and from it appears the last person Caden would ever suspect. After this, Caden is given a quest by the Elderdragon. If he fails he'll be eaten! On top of this, the science room at his school blows up in a cloud of green (and stinky!) gas. There's an attack by an enormous swarm of bees. Who's behind all this? Could Caden complete his quest on time? And what is Rath Dunn up to in all this? The answer turns out to be worse for the Greater Realms and Asheville than anyone imagined!

Man, this book really was terrific! There's a lot of mysterious things going on, a lot of creepy villains, a lot of tension among the main characters and a lot of exciting action in the end when everything breaks loose! As you can see, there are a lot of reasons to like this book, so go and check it out! Actually, go and check the first one out (see my review here) and this one and the third one. Maybe, if you're not as busy as I am, you could spend an afternoon or a day or a couple of days reading them back to back to back. I couldn't think of a better way to spend some time this summer!
Posted by Iron Guy Carl at 4:49 PM 5 comments: