Help Us Get Rid of These Fried Worms!

That's right. Our library is overrun with fried worms--that is, copies of the book How to Eat Fried Worms by Thomas Rockwell. There are several copies left over from Monday night when Miss Laura showed the movie, so I need your help getting them out of here. Here's the deal: you check out one of our copies of the book, read it, and then write to us and tell us how you liked it. You can be honest--if you liked it, didn't like it, thought it was lousy, thought it was better that a large pizza with everything, you could tell us. Just put your thoughts in the Comment section below this post and I'll publish them in a future post. But not only that, I'll also give you TWO FREE PRIZES from our ultra-cool prize box. Good stuff in there. There are books, of course, but also posters, a t-shirt, and lots of other cool things.    . Come by the Myers Park library and check one out. Don't live near here? Not a problem--just contact your local librarian and I send her or him a copy. And I'll also send your prizes to that person. Don't live in Charlotte? Also not a problem. Just include an address (which I won't publish) with your review and I'll find a way to send the prizes to you. All the instructions on how to leave comments/reviews are on the left-hand side of this blog. If you still don't understand, call the Iron Guy at 704-416-5800 and I will help you. All right, check out one of these books before I'm totally engulfed in them! 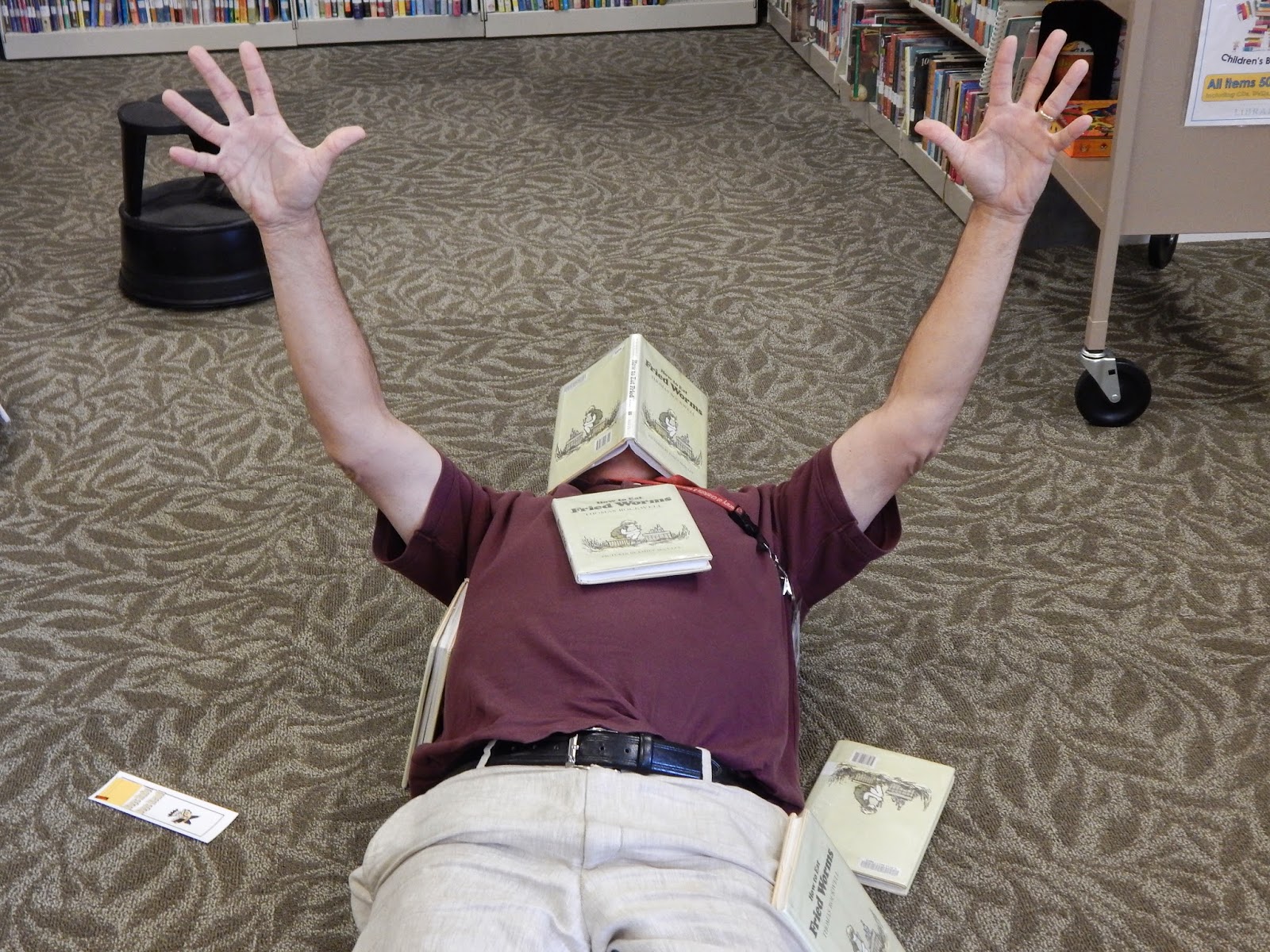 Fried Worms at the Library!

That's right, guys--fried worms, right here at the Myers Park library next Monday, September 22 at 6:00 pm. Actually, we're hosting the movie How to Eat Fried Worms here this Monday night. My coworker, Miss Laura, will show the movie and I'll say a couple of words about this blog before she starts. As you may know, the Iron Guy thinks this is one of the great guy books of all time (see my original review here). I bet the movie will be good too. (although I've never seen it) I hope a lot of you reader guys come out and watch it. Be sure to call 704-416-5800 to sign up for it--we have room but space is limited. If you've never read the book, there will be copies to check out. And if you read a copy and send in a review, I'll give a prize out of our ultra-cool prize box. Hope to see you there!

By the way, you may bring your own drink. We'll provide a snack. Guess what it'll be??  Come on, guess.

First Terrific Book of the Season!

After-summer greetings, all you reader guys! Summer's over now and, even though the Iron Guy is always somewhat sad to see summer go, he's also always glad at this time of year because that's when many of the coolest books come out. For example this fall we get The Blood of Olympus, the latest and final book in the Percy Jackson's The Lost Hero series. We also get The Copernicus Legacy: The Serpent's Curse, the second book in Tony Abbot's unbelievably good new series. I've also ordered  Alvin Ho : Allergic to the Great Wall, the Forbidden Palace, and Other Tourist Attractions by the fabulous Lenore Look--which actually came out in August, so it's technically a summer book. No matter. The Alvin Ho books are possibly the funniest books out there and I can't wait for this one!!

But today I want to tell you about Flashpoint, the latest and last book in the Unstoppable series from The 39 Clues. And is it ever good! Exciting, funny and intense, this book is a fitting end to the adventures of Dan and Amy Cahill. Here we go, everybody--J. Rutherford Pierce, the ruthless media tycoon who took the Cahill serum that gives super strength and intelligence, is about to announce his plan to run for president. But that's not all--the presidency is his first step to world dictatorship. And he's manufacturing enough serum for an army at a secret chemical plant. The only way to stop him is complete the formula for an antidote. Pierce knows about this, however, and has sent out not only his serum-enhanced goons but also his own serum-strengthened son, Galt, to stop them. On top of that, Amy has taken the serum also--but this one is the original Cahill concoction, which kills whoever takes it in seven days. And Amy took it five days ago! Even if they manage to find the last ingredient for the antidote (unlikely), could they avoid the Pierce minions (more unlikely) and get the antidote to Pierce on his heavily-guarded island (most unlikely of all) before Amy succumbs to the serum's effects?  Oh, man! Oh! Man!!! The only way you'll find out is by reading this book! But I guarantee one really good,wild and exciting ride if you do!

This book gets the Iron Guy Seal of Approval as ONE TERRIFIC BOOK!! 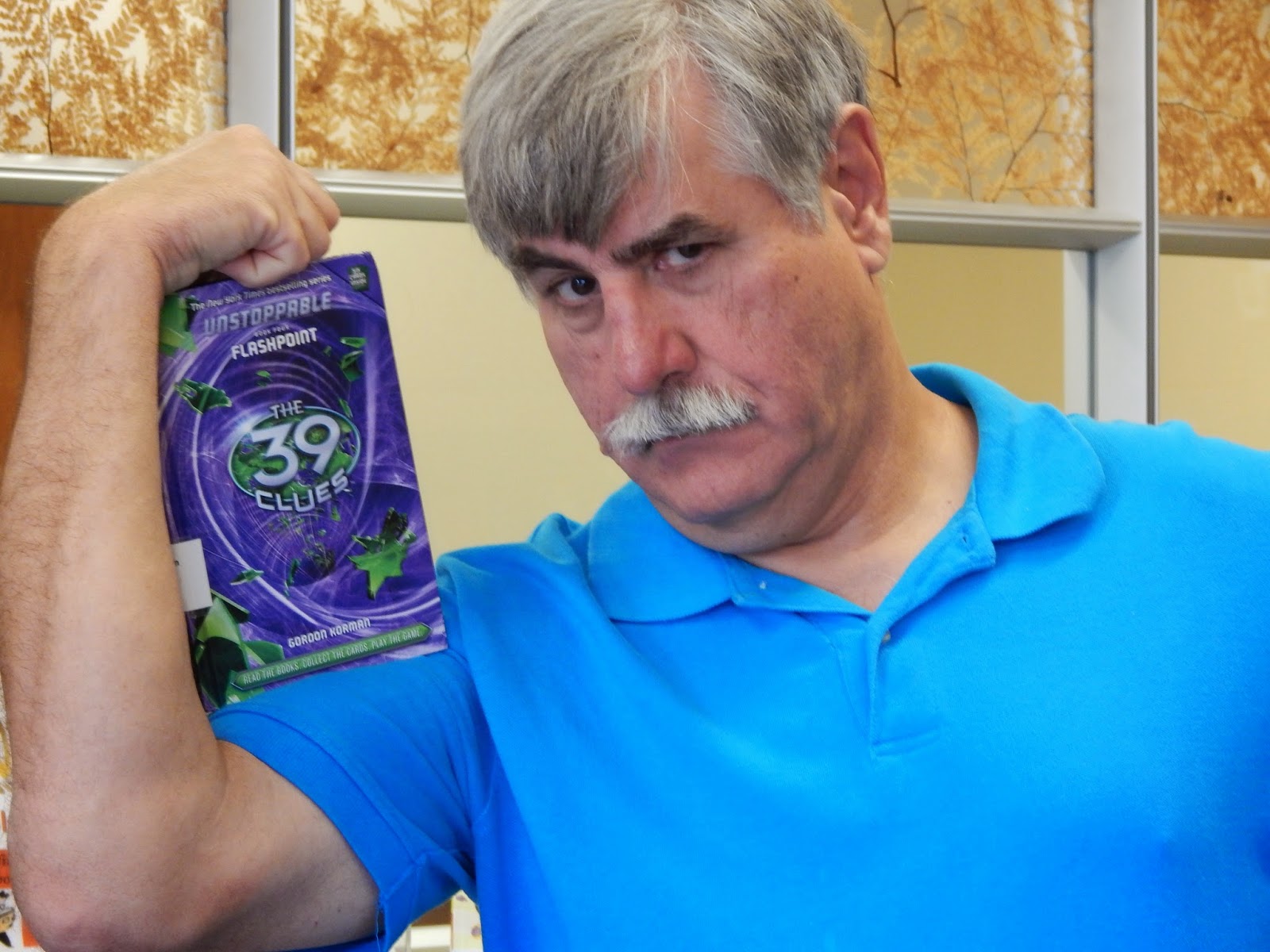 And let me know if you've read it and liked it. Leave your thoughts in the "Comment " section under this post. And also tell me which branch of the Cahill family you belong to, if you're also an agent. I don't mind saying that I'm a Tomas--only fitting for a MANLY MAN like the Iron Guy!

Legos at the Mountain Island Library!

Hey, hey, hey all you reader guys in Charlotte and everywhere else.  The Iron Guy finished up his summer in high style, going to Cherry Grove Beach in North Myrtle Beach, South Carolina over the
Labor Day weekend. Had a great time and even got to do some parasailing, a truly MANLY sport. It was a good summer, especially for the library. We broke records with our Summer Reading program this year. We had 26 million minutes worth of reading over the summer--and a lot of it done by BOYS, no doubt! Thanks, guys, and keep it up.


One of the most fun events of the summer was the Iron Guy's visit to the Mountain Island library. The fabulous Ms. Jionne Johnson held a Lego building competition and asked me to pick the winner! She also asked me to talk to their kids about this blog, which, as a truly helpful MANLY MAN, I was glad to do. There were a lot of kids there and a lot of great Lego creations. How was I going to pick only one out of all great designs? But, with the help of the kids, I finally chose one by Alex (I think that's his name) and it was very impressive. Thanks to everyone at Mountain Island and I hope to hear from you! Write in some book reviews and I'll post them on this blog.
Posted by Iron Guy Carl at 9:36 AM No comments: