Ice Drift and Alvin Ho 5 or Why It's Not Necessary to Mention Fungus, Snot and Earwax All the Time

Hey, reader guys everywhere! Summer is here at long last. School has been out for a couple of weeks now, swimming pools and theme parks are open and fun reigns supreme! And reading is king over the summer, Yeah, I know school is out and you may not think about reading but the Iron Guy believes that reading is fun and I intend to share some fun reading with you over the summer. And here are a couple of good reads to start off:

Here's a survival story along the lines of Island of the Blue Dolphins, except that it doesn't take place off the California Coast but in the frozen Arctic Sea. In the 1860's, two Inuit boys and their dog are hunting for seal when an iceberg hits their ice floe and sends it drifting into the Greenland Strait. They have no kayak and swimming to shore is impossible--even if they were close enough, the freezing water would kill them almost instantly. And it's October. They're about to go into the coldest and darkest part of the year when it can get to 40 below. And there are bears. And even if they survive the winter, what will happen in the spring when their ice floe thaws and breaks up? This is a good and suspenseful story, just the sort of thing for a guy to enjoy. You'll really wonder if survival is possible. This is one you're going to enjoy. Besides, it's good to read about the frozen Arctic when it gets so hot during the summer!

Alvin Ho: Allergic to Babies, Burglars and Other Bumps in the Night by Lenore Look

This is another terrific book in the Alvin Ho series. These books are funny, funny, funny and each one should come with a You-Will-Laugh-Out-Loud guarantee. All of them feature second-grader Alvin Ho, who is scared of everything. Lighting storms. Getting stuck in trees. Speaking up in class. Dead authors who give tours of their houses. He evesn carries a Personal Disaster Kit which contains like like Band-Aids, a whistle (in case you're so scared you lose your voice) and Garlic for "fending off vampires and teachers." In this one, Alvin's mom is expecting a baby. She shows him the ultrasound pictures but he says it looks like an alien. Then he notices that his tummy is getting big too. Oh, no--that must mean HE'S pregnant!! He doesn't want to have a baby! Not only THAT, there's also a burglar in the area. Now Alvin's got something ELSE to be scared of! Wait--he's home alone after he fell asleep in the closet and his mom had to go to the hospital. Who's that coming up the stairs?? Could it be the BURGLAR??!! Alvin's brother rigged up a trap for burglars--WILL IT WORK??? Oh, man, you've got to read this one!! You will laugh out loud when a TV reporter shows up at Alvin's school and a classmate says Alvin's pregnant! Or when the other boys in class learn that they're pregnant! Or when Alvin solves the baby-crying problem. Or when he eats six ice cream cones and a lick in a minute and a half. So get this and have some good summer fun.


This one gets the Iron Guy Seal of Approval as One Terrific Book! 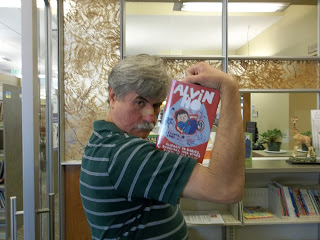 And if you'd like to find out about more Alvin Ho or survival books, click on the "Alvin Ho" or "survival stories" tab under this post.

These sound like a couple of great books. With a boy of my own I love the boy appeal. Thanks for sharing them with the June Carnival of Children's Literature.

Thanks so very much, Carl a k a Iron Man Dude, for loving Alvin's latest caper. Yup, he's gets in quite a mess this time :) but it's all great fun, fun, fun. And I'm SO HAPPY to know that he made you laugh! xxoo

Woohoo! Thanks very much for your review of my latest Alvin Ho book, Iron Man Carl Dude. I LOVE your title, Why It's Not Necessary to Mention You Know What All the Time. You totally get it! Summer reading was my favorite thing to do when I was little. It's a great time to enjoy a book under a tree, or in a tree, or with your toes in the sand, or anywhere! I hope your young readers will take Alvin along wherever they go. Thanks again! xxoo

I am thinking about reading these books... Thank you for these reports.