Once Again--Is Michael Phelps, Like Percy Jackson, a son of Poseidon?

Hey, guys, especially all you Percy Jackson fans, if you've been watching the Summer Olympics, you've probably been amazed at the incredible Michael Phelps. I mean, this dude has been competing way past the point other athletes have packed up and gone away. AND he's not just competing,  he's still winning gold medals!! It's just unbelievable. So that made think of a post from August 20, 2008 in which I asked if he were a son of Poseidon, just like Percy Jackson. Here's a copy of that original post: 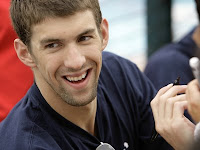 Well, think about it---Percy is powerful in the water; Michael is powerful in the water. Percy has ADHD; so does Michael. Coincidence??? Hmmmmmm......
Of course, someone is bound to say, "But Michael Phelps is 23 years old. He turned 16 before Percy. Why didn't he claim the ancient prophecy?" Don't you remember that Grover said in the first book that some demigods never find out about their parentage and grow up to be famous people due to their remarkable abilities.
"OK, why didn't the monsters get his scent and track him down?" PLEASE--ask me a hard question!! The answer is obvious--the monsters didn't catch his demigod scent because of all that chlorine in all those swimming pools!!

Plus, someone left a comment saying that Michael  has a sing le mom and Percy Jackson has a single mom.

Too many coincidences??? Hmmmmm....

So what do you think? Do we have a demigod on the US swimming team? You gotta wonder. Did you see him in that 200-meter event Wednesday night? He didn't just win--he DOMINATED that race! He was so impressive that our own Carolina Panthers football team paused its preseason game Thursday night to watch him win! So how about it, boys? Do ordinary mortals keep winning in the water like he does? Is Michael Phelps an unknown son of Poseidon? Leave a comment in the Comments  section below this post and tell us!
Posted by Iron Guy Carl at 11:57 AM 1 comment:

Hey, everybody is the great land of summer! Our good friend Reid has sent us not just one but two of his first-class reviews! He always tells us about very cool books, so let's hear what he will tell us today:

The Mysterious Benedict Society and The PerilousJourney is a follow-up to the last and is even better! In it the special children go on a hair tingling adventure with the Ten Men on their trail. They catch taxis and go on boats to follow a path of clues Mr.Benedict has left for them. This book gets you even closer to the danger than ever before. It is a very interesting text that I hope you will read. And if you do read it you are guaranteed to like it.

Mr Lemoncello's library is about a boy named Kyle that really wants to check out a book at the new library. The new game maker that is world-famous designed it! And, Kyle just found out about an invitation only lock-in.He is so excited that it is finally time for the lock-in. But when he gets there he realizes that he is going to have to get ready because what will happen next he will never forget. So read this book and you will never forget it either. So make sure you get it or else you will not have the adventure of a lifetime.

Thanks, Reid! I enjoyed that book (which is actually called Escape from Mr. Lemoncello's Library) and I would LOVE to work at that library! The Mysterious Benedict Society books sound great too.

So, guys, take a clue from Reid and check out these books. Still time left for lots of fun summer reading!
Posted by Iron Guy Carl at 5:14 PM No comments: