Greetings, all you reader guys! The third contestant in the World Series of Reading Contest came by last night to claim his well-deserved prizes. This mighty contestant is none other than Beastly Beaman, who sent us two reviews that covered seven books. He claimed two items out of the ultra-cool prize box, which were the books Questors by Joan Lennon and The Roar by Emma Clayton. (this book got the most comments I've ever had about a book) 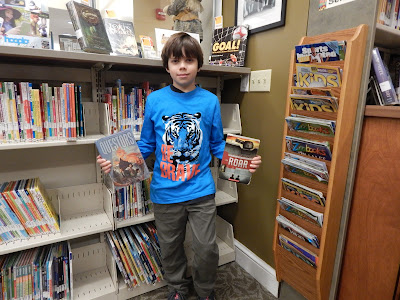 Well done, BB! Please keep sending more of those great reviews. As I've said before, all reader guys are always on the lookout for new reads and who would be better to tell us about them than another boy? So keep them coming, BB!
Posted by Iron Guy Carl at 3:27 PM No comments:

Another Review from the Awesome Aaryan!

Hey, everyone, we are lucky today because our new friend Aaryan sent us another review! This ought to be good because it's about Captain Underpants and the Attack of the Talking Toilets by Dav Pilkey. All guys enjoy Dav Pilkey's books, especially this series, so let's hear what Aaryan said about this one:

Thanks, Aaryan! As I said, I have not yet met a boy who didn't like these books and there's probably some boy out there who has not read them yet, so I bet he'd like your recommendation. Keep these reviews coming!

PS--how do you guys like the new background?
Posted by Iron Guy Carl at 3:45 PM No comments:

And Aryan Claims His Prizes!

Our third-place winner, the fabulous Aaryan, came in and claimed his prizes today. 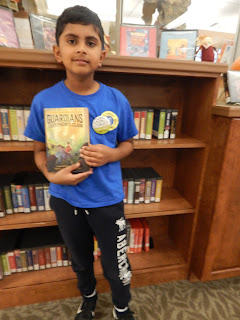 He's holding a copy of Guardians of the Gryphon's Claw by Todd Calgi Gallicano (and it's signed by the author!) and he's wearing his other prize, a Wimpy Kid button. He also brought us a review but I don't have time to post it today. Next week, though!

Well done, Aaryan! I look forward to posting your review and getting many more.
Posted by Iron Guy Carl at 6:23 PM 1 comment:

Look at this! Our World Series of Reading champion, the great Mr. Fox, came in today to claim his well-deserved prizes. As first place winner, he received all three books in The Last Dragon Charmer trilogy by Laurie McKay. (and all of them signed by the author!) 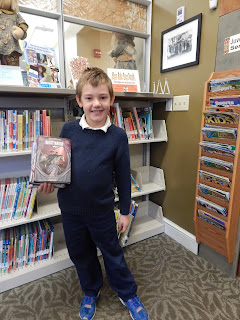 And, form the ultra-cool prize box, he choose a really terrific book, Hamster S.A.M. Odd-Ventures in Space by Dave McDonald. (a very fun book! See my review here. And the author came to visit us once) 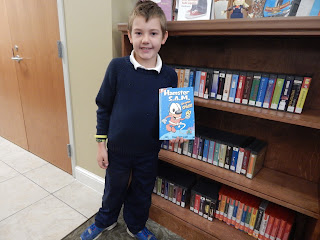 Congratulations, Mr. Fox! Keep sending us those reviews! The Iron Guy and all the other guys out there are always looking for good reads, so it's good there are boys like you who will tell us about them.
Posted by Iron Guy Carl at 4:19 PM No comments:

One Final Swing--Then the Winners!

OK, guys, the MLB World Series finished Wednesday with game 7 (yaayyy Houston!) and the World Series of Reading Contest ended Wednesday at midnight. Both contests were memorable and I bet people will talk about them for a long time afterward. Yes, guys, when you are old and gray and your grandchildren sit admiringly at your feet, you can tell them, "Yes, I remember the historic World Series of 2017 but, what's even better, I remember the legendary World Series of Reading Contest of 2017" and they will be impressed!
Well, all silliness aside, our new friend Mr. Fox sent in one last review before the final inning, so let's see what he read and liked and then we could tally up the final score.

Book Review: Who Was Leonardo da Vinci? by Roberta Edwards
The story is about a famous artist named Leonardo da Vinci. His father and mother were never married and after he was born, they started new families. His dad took Leonardo to Florence, a city in Italy, to work at an art studio. Leonardo was a talented artist. He created many paintings but painted only 3 women: the Mona Lisa, the Young Girl with Ermine, and Ginevra de' Benci. He designed many vehicles to get around in the air, in the water, and on the ground, including a working bicycle. I liked the book because it was interesting to learn about someone who was a great, great artist and inventor.

Thanks, Mr. Fox! All guys like these Who Was... biographies. I've read a few myself. (check out the "Who Was..." tab under this post to see what I liked) Leonardo was certainly an interesting man who had a lot of brilliant ideas and could do a lot of different things well. Did you know he designed the first tank? 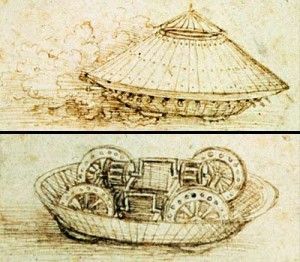 Yep, he was quite a guy. Anyway, now let's figure up the scores and announce the winners!

According to the rules, this review of a Who Was...biography was worth three points. Adding that to Mr. Fox's eighteen points from Tuesday, that gives him a whopping total of twenty-one points and makes him the First Place Winner!!

In Second Place is The Beastly Beaman with seven points and Third Place goes to Aaryan with two points. That means that we have three winners!!

And don't stop sending in reviews! Both I and all the reader guys out there always love to hear about terrific fiction, biographies, nonfiction, graphic novels and audiobooks so that we can find cool stuff to read and listen to. So keep them coming! You never know if the Iron Guy might come up with some more ways to keep you participating.
Posted by Iron Guy Carl at 10:55 AM 3 comments:

Labels: biographies, Who Was..., World Series of Reading 2017

And Another Boy Steps Up to the Plate!

Yes, indeed, everybody, the contest keeps getting more exciting by the minute! Just as the Dodgers knocked in some runs in the sixth and seventh innings to win and force tonight's game # 7, so we've had a new boy send in reviews in the late innings of this game. His name is Aaryan and we're thrilled to have him on board. Let's see what he has read and liked lately:


Diary of a Wimpy Kid Old School by Jeff Kinney

One of my favorite books are Diary of a Wimpy Kid books. They are one of my favorites because I like how they illustrate the book and I like the speech bubbles. There grandpa make the story very interesting because in the book Greg almost died. They gave the characters very good names and the title gives a good hint what the story is about. In the book they make it funny that the kids have to go to camp because somebody’s tooth gets stuck in Rowley’s forehead. It was very funny when Rodrick’s van runs out of gas so Greg’s grandpa goes and gets gas and by that time the car falls in a ditch. I like how they solved the problem by Gregs dad starting the whole Silas Scratch thing but the myth still continues in the book about him and Greg was never scared of him again. That’s why I like this book a lot.

Thanks, Aaryan! We truly appreciate these reviews. Both of these books sound really good! Lots of boys enjoy camping and it's good to have the right info about it--especially if it  rains! And having to go to camp because a tooth got stuck in somebody's forehead--there must be good story behind that! (hmmm, do I sense a camping theme here?) I bet there are other boys out there who'd like to read these books too!

Anyway, let's tally up Aaryan's score. He sent in two reviews that were worth one point each, so that gives him two points! Good work, Aaryan! Glad you joined our contest.

Just yesterday we received a new book signed by the author. It's Guardians of the Gryphon's Claw by Todd Calgi Gallicano. 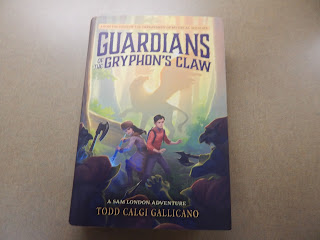 He sent us a signed copy to give away in the contest. 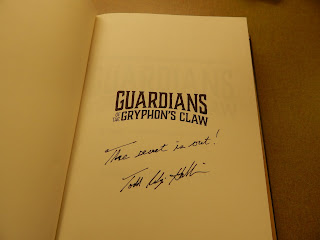 So now it's the second place prize. Click here to see what the first-place and other prizes are.

OK, boys, the innings are winding down but there's still time! Send in those reviews by midnight tonight! It may be tomorrow before I can post them but I will get them up and maybe even determine the winners. Step right into that batter's box, guys! All  the world is holding its breath to see the final scores of the MLB World Series and the World Series of Reading Contest!

Posted by Iron Guy Carl at 4:40 PM No comments: