The Son of Neptune by Rick Riordan

I may be Charlotte's # 1 Rick Riordan fan. The Son of Neptune is a good reason why. It's the latest in The Lost Hero series. AND--blow the trumpets--Percy Jackson is back in this one!!

Percy has two major problems as this book starts, though. First, he can remember who he is

, where he comes from or why he has a pen that becomes a sword. Second, he's being pursued by the Gorgons, the two immortal sisters of Medusa. Why do they want to kill him? Why do they reform as soon as he kills them? The Gorgons eventually pursue him to Camp Jupiter, a place for demigods but with a big difference--everything in this camp is based on ancient Rome. In this camp, Percy meets two new friends, Hazel and Frank, who have strange powers of their own and some deep secrets. But soon they find that Gaea, the spirit of Earth, is waking and has sent an enormous army of monsters to destroy Camp Jupiter. If that's not bad enough, Death has been chained in Alaska or the monsters can never stay dead. Percy, Hazel and Frank are given the quest to unchain Death and return in five days. Can they get from California to Alaska and back in that short amount of time? Can they survive in an area that's outside the protection of the gods? Even if they do this, can they get back in time to save the camp? You'll have to read it to find out!!

If you do, you'll be in for a good time, as you always are with Rick Riordan's books. They are enough thrills, action, fights, danger, monsters, heroes, and impossible quests to satisfy any guy reader. PLUS--Percy Jackson returns in all his wisecracking and heroic glory! And when Percy is around, there's not only adventure, there are laughs! Just wait until you read about the Gorgon who wants to tell everyone about the low, low prices at Bargain Mart, the Roman ghost whose name means Mr. Underwear, or why why there is a feast for tuna. Thrills and laughs--how could you miss with a book that has all of these? Check this one, guys! Go Percy! SPQR!!!!

Needless to say, if it's by Rick Riordan, it's One Terrific Book! 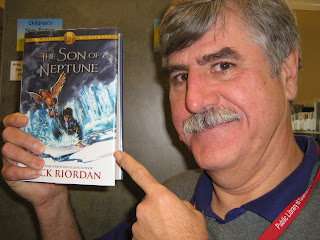 CABIN FEVER but ALVIN HO might be better but I am doubting it though when I get my hands on that book I am going to judge that.