The Return of Michael! 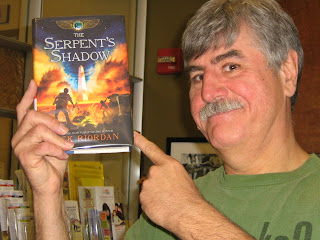 You see the Iron Guy beaming with happiness because he has just received his copy of The Serpent's Shadow, the final book in Rick Riordan's Kane Chronicles trilogy. I'm Charlotte's # 1 Rick Riordan fan and any new book from him is the cause of much joyous celebration. (What?? Did you say that you're a BIGGER Rick Riordan fan than me??? HA!!! I don't believe you!! If I'm WRONG, then write in and PROVE it!)

But, as I said, we have four reviews from our friend Michael. Let's not waste any more time:


The Adventures of Tintin, volumes 1-7
by Herge
Tintin is a reporter who is always finding intriguing stories to follow. Usually, he gets caught up right in the middle of his story, and he's always having to fight off enemies with guns and knives in addition to the ones trying to find creative ways of killing him. There aren't many dull moments in this series. When I first heard about it, I thought it was just a cute kiddie comic about a boy and his dog, but the dog, Snowy, really doesn't have much to do with the stories. If you like thrillers and hilarious lines, you won't better than this comic-book series right here! Read them all!

The Adventures of Tintin: the movie novel
by Alex C. Irvine
If you're not sure about the Tintin movie, or if you really want to see it but it's not on DVD yet, then this novel is right for you. It has the exact same details and dialogue as the movie, and in some ways, this book is even better than the movie. The author has done well making the complicated scenes simple enough to understand without watching the movie. I think it's a great novel, and if you want to be the ultimate Tintin fan, then you can watch the movie and read the novel, like I did! It was a great book and a great movie.

Storm Runners: book 3
Eruption
by Roland Smith
This is the final book in the Storm Runners trilogy. If you've read my reviews on the other two books, than you should be caught up. In this book, the Rossi Brothers' circus has gone missing in Mexico, so Chase, John, Tomas, Nicole, Cindy, and Mark head down to Lago de la Montana to go and find them. The only problem is that Lago de la Montana is right at the base of Mount Popocatapetl, which is showing signs of eruption, which could turn out to be the worst in its history. Plus, if the circus has had an accident, the animals could escape... and Chase would rather not have an incident like what happened in the last book happen again. Although all this suspense is built up, and it seems as though something great is going to happen, nothing actually happens. This book is more about the characters' relationships with one another and animal attacks more than storms. There is not one storm in this book, and in the end, Mount Popocatapetl doesn't even erupt. Plus, I don't approve of this being only three books. He could have had 50 books in this series! But he only chose three. I hate to say it, but this is the worst book in his trilogy. Look out for his next book coming in September: Cahills Vs. Vespers, book 4: Shatterproof.

Herbert's Wormhole, book 2
The Rise and Fall of El Solo Libre
by Peter Nelson and Rohitash Rao
After 6 years, Alex, Sammi, and Herbert are finally back in this mediocre sequel! GOR-DON, the evil G'Dalien from the last book is back, and this time, he has a guaranteed plan to get rid of the three pretend Alien-slayers. Alex sets out on a mission to find his 110-year-old self, like Herbert, but Alex suddenly gets prideful and wants to be a solo Alien-slayer. Will Herbert and Sammi tell him the truth? The main happening in this book, however, is when GOR-DON, in disguise, tricks Alex into trash-talking the G'Daliens' sworn enemy, the Klapthorians! The Klapthorian general promises an attack on Earth! What will happen to the planet? Plus, Sammi thiks it's wrong to let all of Merwinsville keep thinking that the three of them are still real alien-slayers when they had really just used a life-size video game. She doesn't want to go back to the future, but Herbert made a rule that either all threre of them or none of them went through the wormhole. Could this be their last mission to future Merwinsville? It all unravels in this long-awaited sequel! Like I said at the beginning, this book is pretty average. It's mostly stupid humor and immature behavior, so it's a little boring. There was one really good thriller-type scene (no guns or anything), and that was my favorite part of the book. For those of you who read the original Herbert's Wormhole when it was released in 2006, I found that I'm really too old for the series now. It was great when I was 10 like the characters, but now the characters are still 10 and I'm 16. So, all-in-all, it's an average, nonsense book with a few exciting parts. It's probably worth the read.

Thanks, Michael! We really appreciate the way you tell us just how you see things. The Tintin graphic  novels have looked really interesting and now the movie novel does too. I'm sorry you found the last Storm Runners book disappointing. And the same for the Herbert's Wormhole book. But maybe there are a lot of 10-year-old guys out there who would like it! So you may have done us a favor. Have any of you out there read the Herbert's Wormhole books? Would you like to? Write in and tell us!!

And, if any of you have the mistaken idea that reading is not for guys, here's a picture of the Iron Guy striking his MANLIEST pose and showing that he is a walking advertisement for guy reading: 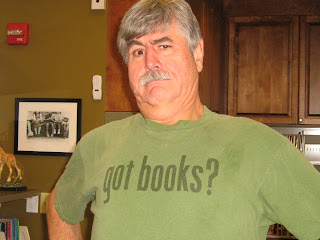 There!! How could you argue with a MANLY MAN like the Iron Guy???
Posted by Iron Guy Carl at 11:45 AM

Nice shirt where did you get such a manly shirt?

A good friend gave to me for Christmas a couple of years ago. That's the kind of thing MANLY MEN give to each other.