Third Meeting of the Boys Read and Write Club 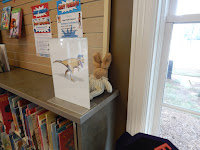 That's right, guys, we held the third meeting of the totally hip and happening Boys Read and Write Club last Saturday. And we had a good time too! Our friend Mighty Micah, who was at the second meeting, couldn't be here this month but we did have a great new friend come for the first time. His name is Walden and he likes mystery and comedy books. But I'll get to that in a minute. Our club always starts off with an activity, so this time we tried the Balance and Rescue activity from the upcoming Superhero Training Camp program. (which will happen at 2:00 pm on June 30 here at the Myers Park library) I put two rows of narrow tape down on the floor. One row of tape represented a cord stretched between tall buildings; the other was a wire over a deep prehistoric canyon. At the end of each row was a Cute Little Bunny that needed rescuing, one from a burning house and one from a T. Rex. If his feet didn't stay on the tape, he'd plunge hundreds of feet to certain destruction. If
he touched the burning house or the T. Rex, he'd be burned to a cinder or snapped up by hungry jaws. Was Walden up to challenge? Of course he was, just like all the MANLY MEN who attend this club! He walked the rows of tape as confidently and sure-footedly as the most fearless mountain goat. In fact, he even managed to walk BACKWARD at one point! What a guy! What a hero! (too bad I don't have any pictures of him performing his mighty deeds available)

After that, we had some snacks and talked about some of our favorite books. Walden has read some books by Gordon Korman that he likes a lot, such as The Masterminds. And, as I said, Walden is a big fan of mysteries and comedy. I wish we would have had some copies of the Brixton Brothers books on hand, so he could have gotten both in the same books.

However, I did have The Wright 3 by Blue Balliet, which has a good bit of mystery. We also had Alvin Ho: Allergic to Camping, Hiking, and Other Natural Disasters by Lenore Look, one of the hold-your-sides-funny books in the Alvin Ho series. He checked them out and will write reviews of them for us. Good choices, Walden! Can't wait to hear what you think of them.