Hey, everyone, exciting news! Our old and good friend Sammer got to spend a whole afternoon on October 14 with a favorite author, T. A. Barron, the man who wrote the Merlin series. In fact, as you'll see, Sammer got to meet Mr. Barron because our boy writes for this blog! Good things can happen when you contribute regularly to us! Anyway, Mr. Barron made an appearance that evening at Park Road Books here in Charlotte. Sammer was there and so was I.  Mr. Barron was very interesting, talking about writing his books, following dreams and how minature dragons can be powerful. I'll say more about that later, but first let's hear from Sammer. Not only did he spend the afternoon with Mr. Barron, but he also did an interview! Let's hear it, Sammer: 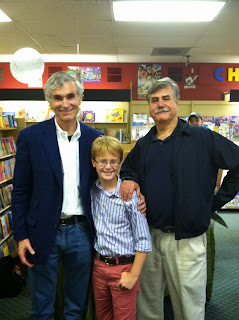 I got to meet T.A. Barron because we are friends with people who work at Park Road Books. They know I like his books.  So when they knew he was coming, they called me.  They offered to let me spend the day with him and to interview him because I write for the library blog Boys Rule! Boys Read!
I was very excited.  I also got an advance copy of his newest book Atlantis Rising.  It is very good and I have read it and reviewed it on the blog.
We first went and ate lunch at Sir Edmond Halley’s.  While we ate, I interviewed him.
My experience with T.A Barron was amazing. He had very good details in his regular speech. It was almost like he was writing a story right then and there.  T.A Barron was taller than I expected. In his picture he is wearing a jacket so it makes him seem short. But when you meet him, he is about five times bigger than you would expect.
We also talked about parts of his books that I liked. He asked me if I knew that a character in one book was Merlin in disguise.  And he also said he knew for five years a secret about a character before he could put it in his book.
Here’s my interview.

Sam:  What made you want to write about Merlin and Atlantis?
TABarron:  Both Merlin and Atlantis are among the most cherished characters and stories out of myth. Both have many centuries of song, story, and legend—every form of storytelling—but both have a gap.
Merlin, whom we know from the Celtic tradition, when his story was written down from the oral tradition in the 5th or 6th century AD by a monk, and from the Welsh story known as  the Mabinogion, has had his story told and Yet almost every time he appears in this rich and luminous and beautiful tapestry of myth, he is an old person. The hole in that tapestry was his youth.
It was my job as a writer to fill in this hole, to attach it to the other stories, but to be original at the same time.  Merlin, who is so wise in all the legends and myth, gains his wisdom from experiencing human frailties and greatness not on just one side.  He has both dark and light inside, which is why he can be such as great mentor.
Tamwyn’s greatest wisdom involves embracing both sides. He has to be compassionate and tolerant, both of which are important for wisdom,
Atlantis is the same principle; we have heard about Atlantis for more than 2,000 years, since the ancient Greek philosopher Plato wrote about its destruction. But how did the place become so magical? What was its creation story?
Plato’s story is a parable about how a very successful society fell into its own destructiveness. It is a morality tale. So now that name Atlantis is a symbol for any lost paradise.
I worked for 17 years on Merlin’s story. And when I finished, I wondered what myth would capture my attention and call to me. What appeared was the Atlantis story, which also had a gap that became my task as a writer to fill.  It’s been fun. In The Ancient One, I got to draw on a lot of Native American lore.

Sam:  What inspires you as a writer?
TABarron:  Nothing inspires me more than talking with bright, intelligent young people. I have five at home, my five children.  But being out in nature also inspires me. It was no accident that I was drawn to Merlin. He’s a Druid.
The Hero’s journey also never fails to lift my spirits.   A hero is a person who has to dig deep to save not just themselves but the world.  They have to have courage, perseverance, hope, faith, and honor. But it has to be earned.  And the journey is all about that.
Good fiction must be true. It must be authentic. That needing to be true is especially true in fantasy. Not that the events actually happen, but that there is enough detail  to feel authentic, so that the reader is willing to allow the book and characters to be a part of their lives.
In the first few pages of the first Merlin book, when he as a young boy washes up on the beach, I had to make sure that all five senses were present on the first page so the reader would believe.

Sam: When did you decide to be an author, and why?
TABarron:  I first had that dream when I was 7 or 8 and was sitting under the apple tree on my parents’ ranch. I wanted to write. By age 9 I had started my own magazine, called “The Idiot’s Odyssey.”  It was all about exposes of secret truths. I wrote one on what went on the teacher’s lounge—and got in a heap of trouble for doing so, because what I made up was too close to the truth!
I never really believed I could do it [be a writer], but I knew it would be the happiest life for me.  My big influence was my mom, who read aloud at home to us all the time.
After college, I went to England to study at Oxford as a Rhodes Scholar.  I travelled widely, in Asia and Africa, dong all sorts of odd jobs. I was a roof thatcher and a luggage carrier at the base of Mount Kilimanjaro. And during that time I wrote my first novel.  When I got back to Oxford, I sent out my manuscript to 32 different publishers, expecting that one of them would publish my novel, and then I could move to a mountain cabin and write.
In one month I got 32 rejections. Some were pretty brutal. My dream was shot. So I moved to New York City and worked for a company that invested in environmental issues. But I got up early every morning and wrote. I sat in the back of meetings and wrote.
I liked my job, but I didn’t love it. So one night I had a long talk with my wife, who was very supportive.  And the next day, I went into work and gave a big speech called an annual report, because I was the president of the company at that time. And when I finished, I said, “And by the way, I quit. I am moving back to Colorado to write books.”
That was 23 years and 25 books ago.
If you have a dream, it is essential that you follow that dream.

Thanks, Sammer, for sharing! And you did a very good job with that interview. We are very proud of you!
And, as I said, Mr. Barron, was very interesting and extremely friendly and autographed a program for us: 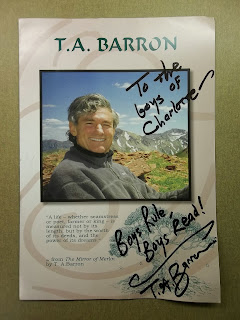 "To the boys of Charlotte--Boys Rule, Boys Read!" Ain't it the truth! Thanks, Mr. Barron and thanks again, Sammer. Keep in touch, both of you!
PS--if you want to see Sammer's review of Atlantis Rising, click here.