In Which the Iron Guy Confronts One of His Worst Fears


Greetings, guys. Because we're all friends here, I need to let you in on a secret. I had a resolution for 2018. Yes, I know you're supposed to make resolutions at the beginning of January but I've been putting this off for a long time. A looonnnggg time. Why? Well, even the MANLIEST of us has something he's afraid of. Something big. Something HUGE and TERRIFYING. Something so big and scary that we don't even want to look at it. In this case, it's---

Harry Potter and the Order of the Phoenix 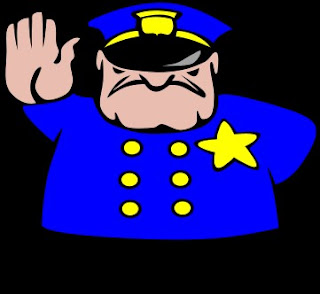 "You're not allowed to run from your fears, Iron Guy!"

"Never mind! Go back and read it like a MANLY MAN!"

Well, I'll put the goofiness aside and talk for real about this book. First, I should let you know that I've never been a big Harry Potter fan. Now, don't get me wrong--I'm not a Harry hater. Those books are OK. I read the first four and liked them well enough but I've never gone Hogwarts wild over them. (yes, I intended that pun!) I know a lot of you guys are total Harry Potter fans. Kids (and grownups) have been telling for years how much they not only like but LOVE these books. I remember that some libraries held parties when new HP books came out. I remember when bookstores opened at midnight so that kids could get the latest titles. I've heard for years about how terrific Harry Potter is but, for some reason, I just never fell under the Harry Potter spell. (I intended that pun too!) So I've just never been in a big hurry to finish the series. And part of it is a kind of fear. Not a "blind, unreasoning panic" (as FDR once said) but a sort of intimidation of the huge size of that book. It's 870 pages long!! I'd need a forklift to carry that thing around!Or at least a pickup truck. Seriously, though, how could anyone, even J. K. Rowling, write something that long and keep it interesting?? So, yeah, I've been a little afraid to plunge into it.

But, in all seriousness, if so many people like it so much, there must be a good reason. And my good friend Ms. Yingling, whose judgement I trust, said this was her favorite in the series. So, OK, I will take the Potter plunge and get started on it. But I will need your support! No mater how tough a guy may be, whenever he undertakes something this big and scary, he needs the support of his brothers-in-arms. Are you with me, men?? If so, then send a comment in the Comments section below. Let me know that you have my back and will support me as I undertake this monumental task. Or if you just want to say I'm a crybaby and should get on with it, that's OK too.

For I intend to finish this book by the end of March. Think I can do it? Or am I biting off more than even this MANLY guy could chew? Let me know in the Comments section!

And any boy who sends in a comment will get one of these new bookmarks I've created: 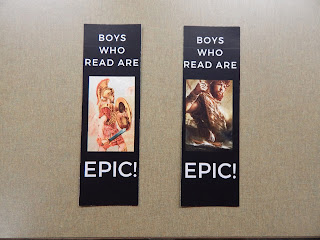 Yeah, they look like they may be more appropriate for a Percy Jackson book but that's what I've got so far. Maybe I'll change the pictures later on. (and, yes, I know there are girls who read this blog, so I'll create some for you too) If you live outside of the Charlotte, NC area and you'd like one of these bookmarks, please let me know in your comment how to reach you (I won't publish that info!) and I'll send them along.
I'll keep you posted on my progress throughout this month. So watch this space and send in comments on further posts because I'll need your support this whole month. (and you could get more bookmarks too!)

I HAVE EVERY CONFIDENCE IN YOUR ABILITIES! You can do it, Iron Guy! Make a page goal for every day, and stick with it, and you'll be done in no time at all.

Thanks, Ms. Yingling! There is just the encouragement I need to turn one page after another!

You can do it, Iron Guy!

You're still a boy at heart, I see. Weigh the book, then decide if you want to read it.

I tried to weigh this book but the man at the truck scales said it would break their machines.

You can do this. Just let me know if you need extra support...caffeine fix, eye drops, muscle relaxant, etc. You will for sure be a stronger person at the end of this quest.

The print is larger, so the book isn't so ominous. This was the book in the series that left behind the magical feel, and stepped into the darkness of what is to come. Not my favorite of all of the books, but I enjoyed it. Have read all of the books multiple times -- when they were first released and before the movie came out. You're getting to the good stuff now.

When you finish this series, try out Shannon Messenger's Keeper of the Lost Cities.

Funny you should mention that series. I actually checked out the first book but got too busy to read it and then got involved with Harry Potter. It will be on my TBR list. (and you are right-the print is much bigger and the pages fly by)