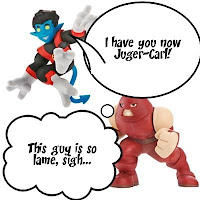 Hi all, it is I, the ever-confused Darth Bill/ Spider-Bill / Pirate Bill (it gets really confusing at times to remember who I am, I tell ya!). Well I hope all you out there are planning on submitting to the blog so we can get Juger-Carl in a dress. The X-Men would be so proud(: 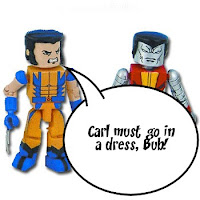 Anyway besides trying to get Carl in a dress I want to talk about two really cool books I have read recently:

1) Interworld by Neil Gaiman and Michael Reaves - This is a really cool story about 15-year-old Joey Harker who is pretty average, except he has no sense of direction, with nothing really

outstanding about him, or so he thinks. Everything in Joey's life changes when, as part of a school assignment, he and two other classmates are dropped off at a random location in town and told by their social studies teacher to find other locations without a map. Joey gets separated from his classmates and, before he knows it, he walks out of his world and into another dimension. It turns out that Joey is very special in that he is able to breach the barriers that separate the multiverse and the innumerable alternative earths that exist. To make things even more confusing, all these earths have different versions of Joey and everyone he knows. There also exists terrible forces that seek to rule all the multiverses such as HEX, an organization made up of magic users, and the Binary, composed of beings who only believe in science. Believe me when I tell you I am only scratching the surface about who Joey Harker is and the story he finds himself taking part of in this fascinating and fun book. This one definitely gets two thumbs up.

2) Tiger Moth Insect Ninja by Aaron Reynolds - This Graphic Novel begins: "Quicker than a centipede on skies. Quieter than a bugzapper in January. More lethal than sal

sa stinkbugs. I am Tiger Moth, Insect Ninja. Harnessing the ancient powers of the martial arts for good, I strike fear into the hearts of all criminal insects. Well, in the fourth grade, anyway." Batman, Spider-Man and all other superheroes move out of the way! There is a new super-powered hero in town that rules above all others. His name is Tiger Moth and at his side is his trusty apprentice Kung Pow, a Pill Bug. These two superheroes fight for what is right at Antennae Elementary School and, boy, are their hands full. Check out their first adventure in this Graphic Novel that moves like a butterfly and stings like a bee. You won't be sorry.

Well, guys, take it easy and blog back,