All Right, Dull and Boring, You're Going DOWN!!

Listen up, all you who think that libraries are only for little old grannies or stuck-up dweebs! This is Carl, otherwise known as the Masked Blogger, and I'm telling you that we are going to stomp all over dull and boring programs!! Like this: 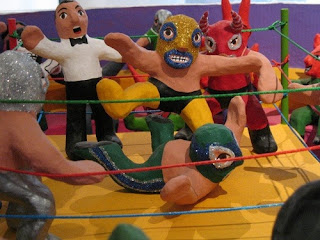 That's right! We at Imaginon don't believe in dull and boring and to prove it, we've got a program coming up on November 26 at 11:00 am featuring stars from the WWE RAW!! Here's what the ad says:
Monday, November 26, 11am-12pm Witness a monster-sized mix of WWE RAW’s weirdest, wildest and wondrous superstars as they make a brutal attack on illiteracy. There’s no doubt that reading is key to success, and RAW fans will hear that message loud and clear at a rousing appearance for youth and teens in the McColl Family Theatre at ImaginOn.
If any of you guys out there can make it, this will be a great time. (But don't even think about skipping class or we'll be all over you like hot sauce on a taco!) Here's the link to find out more.

I used to watch wrestling a lot when I was a boy growing up in Memphis, Tennessee. We had a great TV show, Studio Wrestling with announcer Lance Russell, every Saturday at noon. I'd be in front of that set every week, watching the guys throw each other against the ropes, jump from the turnbuckles, or whack their opponents with folding chairs. Then, on Monday nights, my dad and I would go downtown to the auditorium and watch Lou Thesz or Dick the Bruiser tussle. (This was way back in the day--I won't say how long, but, to give you a hint, Lyndon Johnson was president and the Beatles had been on the charts for only a year) We had terrific characters like Tojo Yamamoto, who was supposed to be Japanese (he wasn't, but he did like to whack his opponents with his wooden clogs)

or Jackie Fargo with his famous "Fargo Strut"

Oh, man, those were the days! Well,the library has several good books on wrestling. Here a few:

Takedown by Rich Wallace--a fiction book. Seventh-grader Donald, living with his parents in New Jersey, is determined to master wrestling but discovers that to win at the sport he must learn to control his temper.

Pro Wrestling: From Carnivals to Cable TV by Keith Elliot Greenburg--published in 2000, it

might a little out of date, but it would still be fun to read about the early days.

Wrestling in action by John Crossingham; illustrations by Bonna Rouse; photographs by Marc Crabtree--a book about the actual sport of wrestling. Full of information on how to wrestle. I wish they had this book back in the day when my friends and I would wrestle! (Sorry, no picture of the book cover available)
That's it, guys. See you at ringside!
Posted by Iron Guy Carl at 3:21 PM