"It Was the Footprint of a Gigantic Hound": My Second Blast From the Past 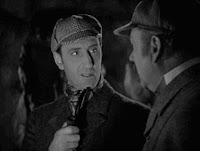 "My dear Watson, if you know where that quote comes from, then you know I'm going to talk about The Hound of the Baskervilles by Arthur Conan Doyle. If you haven't read this book, then let me tell you that you are in for a treat!! Wait--the game is afoot, Watson! I'll let my good friend Carl talk about it."

Thanks, Mr. Holmes. This is my second Blast From the Past, in which I talk about an old favorite that I've never reviewed. This one is really worth telling you all about!
Sir Charles Baskerville was found dead on the grounds of Baskerville Hall, an old mansion on the wild moors of Devonshire. They said it was because of his bad heart, but his friend Dr. Mortimer comes to Sherlock Holmes to say that Sir Charles died of fright. Then he tells the story of the Hound of the Baskervilles, a ghostly and savage beast that haunts the old estate. Dr. Mortimer says that he found the footprint of a gigantic hound near Sir Charles's body! Sherlock Homes, a thorough-going man of logic, doesn't believe in spectres but sends Dr. Watson to Baskerville Hall to protect Sir Henry, the only known heir, because Sherlock believes Sir Henry's life is in danger from a particularly dangerous criminal. The only way to catch the murderer is to send Sir Henry across the moor at night, when the hound will be out!! Will the young heir survive? And will even Sherlock Holmes be prepared for what they find??


Man, oh, man, you've got to read it to find out!! No one does it like Sherlock Holmes! There is hardly any place creepier than the moors around Baskerville Hall and no one creates mystery and suspense like Arthur Conan Doyle. I'd recommend this for the older reader guys who love good stories. And don't worry that's it's an older book--the language is easy to follow and not very difficult. Try it and see if you can possibly put it down!

PS--The library system has a graphic novel version, which I haven't read. Will have to get it.


PPS--There have been lots and lots of Sherlock Holmes movies and lots of famous actors have portrayed the fomaous detective. One was Peter Cushing, aka Grand Moff Tarkin: 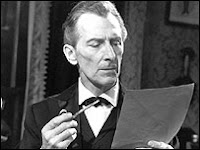 And also Tom Baker who was, I believe, the third Dr. Who:

But my all-time favorite is Basil Rathbone, whose picture you saw at the beginning of this post. Here's a photo from his version of The Hound of the Baskervilles.

Dr. Mortimer tells the great detective that, near the body, were the footprints of "a gigantic hound." There was originally a video clip to go here but it doesn't work anymore. Yep, they don't get any better than Sherlock Homes!! Be sure to click on the "Sherlock Homes" tab below to see what other books I've reviewed.
Posted by Iron Guy Carl at 12:26 PM

Labels: blasts from the past, https://www.youtube.com/watch?v=BxH2kXib290, Sherlock Holmes