The War to End All Wars by Russell Freedman

Attention all you Leviathan fans!! Here's a book about the REAL World War I--and it's a truly great read! It's The War to End All Wars by the very talented Russel 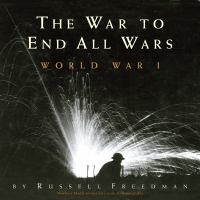 Freedman. Don't know much about WWI? Well, you'll find out here and, once you start, you'll keep turning pages until you're done. This is amazing story and Mr. Freedman is a terrific writer.

As in Leviathan, the war begins in June 1914 with the assassination of Arch Duke Franz Ferdinand of Austria-Hungary. The great powers of Europe think they have foolproof plans to conquer their enemies and that the war will be over by Christmas. They are not prepared for what happens, however. Technology has progressed and weapons have become more deadly and the Allies and the Central Powers become locked in a long and deadly struggle.

This book tells all about those struggles. You'll read about the Battles of Verdun, the Somme, and the battles at sea. There are tales of incredible endurance and heroism, arrogance and stupidity, and unexpected friendliness at Christmas. As I said, Russell Freedman is a very talented writer and he makes the events move right along. He doesn't give just a bunch of dry and dusty facts; he makes the story and the time come alive. He also quotes letters from the soldiers who were actually there, adding more depth and feeling to the story and making us remember that this is not just a story but real events that happened to real people. And I have to let you know that some of the events were terrible. War is an ugly business and some of the sights the soldiers describe are horrific. Keep that in mind when you check this out, guys. Or parents--you might want to check this out for older guys. But if you do, you'll find a book that you won't want to put down until you've read the very last page. I know that was true for me! And you'll find that this book is not thick, slow or boring. You could easily read it in one afternoon, just as I did. So check this out and learn a fascinating story about a time that a lot of people don't remember anymore.

The War to End All Wars receives the Iron Guy Seal as One Terrific Book! 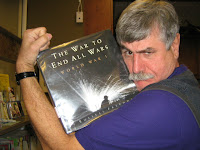 Dear Iron Guy.
Thanks for both of your recommendations. I just finished reading Goliath last weekend and loved it. Great way to end the triology. And, then connecting it to the Freedman's book. Good stuff!
Thanks for taking part in Nonfiction Monday.
Tammy
Apples with Many Seeds

Nice! Love the book cover and lovin' the photo as well. Haha. Will try to find this book in our library. Looks like a great read indeed.

Thanks to both of you for your kind comments! Let me know if you read and like the Freedman book.