...is another book I liked A WHOLE LOT!! This is one of the most imaginative sci-fi stories I've ever come across. And it has lots of battles, fighting, narrow escapes, and things that blow up. Everything a guy could want in a book!
This is one of those "alternative history" stories--you know, if the South had won the Civil War, if the Martians had really landed in 1938, etc. In this story, it's 1914 and Europe is on the brink of World War I but the nations use different types of weapons. The Germans and Austro-Hungarians (called the Clankers) use mechanical walking war machines. The British are called the Darwinists because Darwin discovered not only evolution but also DNA and used the DNA "life threads" to create living weapons and dirigibles. (don't know that word? look it up!)
The story starts when the Archduke Franz Ferdinand and his wife Sophie are assassinated and Alek, their son has to flee for his life in a Stormwalker because the Austro-Hungarian powers don't want him on the throne. Meanwhile, over in England, a girl named Deryn Sharp has cut her hair to try to pass for a boy and join the British Air Service. On her first attempt at flight, she's caught up in a storm and blown out to the English Channel. Does she get rescued? And does Alek get away with his life? Ah, you'll have to get this book to find out! But, one you do, you're in for a good time!! As I said, there's enough action and adventure to satisfy any reader guy. And the illustrations are great, too! Most of the times the illustrations are good but don't add much to the story. Well, that's truly different here. These illustrations catch the excitement and tone of the story better than just about any book out there. So there you go. This one's a winner.
BTW, there's going to be a sequel to Leviathan. Ohhhh, man! I cannot wait!! 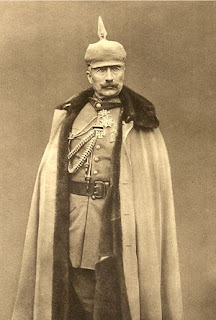 So vhy do YOU vait? This is Baron Karl von KARLMAN saying, "Get up and march to your library or bookstore and get a copy NOW!! ACHTUNG!! GET UP! MARCH! VUN, TWO, THREE, FOUR...."
Posted by Iron Guy Carl at 12:01 PM