Yep, that's right. In The Brixton Brothers: The Case of the Case of Mistaken Identity by Mac Barnett, 12-year-old Steve Brixton is a big fan of the old Bailey Brothers mysteries. He's

read every one of the 59 Bailey Brothers books--some of them two or three times! He also wants to be a detective, like the Bailey Brothers, and is smart enough to be one in real life. Then why is he stuck with a stupid homework assignment on early American needlepoint? When he goes to the local library and checks out the history of American quilting, the lights go out, alarms sound, secret agents burst into the building, and Steve is arrested for treason! Then the action really starts! Steve gets chased by secret agents in a bookmobile, tries to get out of a stretch limo while his arms are tied up, has to escape from his own bedroom, and is nearly run over at sea by a Chinese freighter! Wow! Is that enough excitement for you? AND this book is funny!! You'll find your selves laughing out loud one second and gasping with suspense the next. I enjoyed this book a lot. I think there are going to be more Brixton Brothers books. I sure hope so!! (PS--the illustrations by Adam Rex--who did the hilarious Frankenstein Makes a Sandwich books--are really great and set the tone well, making it look like one of those old Bailey Brothers mysteries. And wait until you see the picture of Steve trying to go undercover in his sailor costume and moustache!)
Carl
BTW, without giving too much away, you'll learn that all librarians know seven types of martial 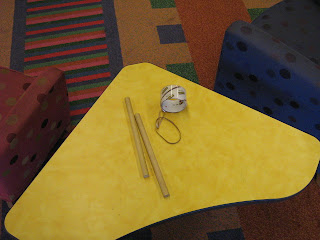 arts. Bill, of course, has the Flashing Book Ends of Death. I have the Nunchucks of Nastiness. Yes, I may seem like the mild-mannered librarian, but with a couple of rhythm sticks, some rubber bands, and a little book tape, I become the NUN CHAKU MASTER OF DESTRUCTION!! 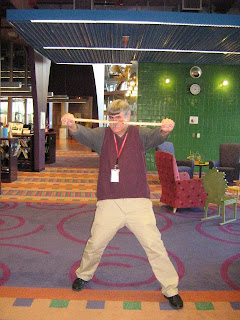