Of Jedi, Sith, No More Dead Dogs and Honor

Hello all, it is I once again. The Sith who is a legend in his own mind: Darth Bill!!!!!!!!!!!!!!!!! (Yikes, I think I just scared myself) I hope most of you out there in the Land of Blog have not forgotten about our recently completed Boys Rule Boys Read Book Series Tournament, because the story I have to tell will curdle your blood I tell ya! As you may or may not recall, the person who came in first of our little competition was the The Mysterious Anonymous (Zonks, I scared myself again. Must be the bold type face.). Well the Mysterious Anonymous turned out to be no other than, drum roll please, the one, the only, Jedi Master Yoda!!!!!! 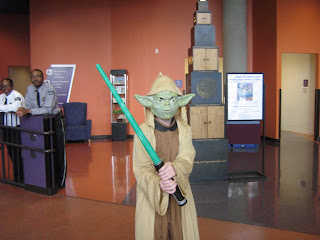 Jedi Master Yoda, up to no good I'm sure, coming to claim his prize. 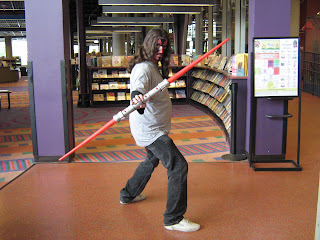 Luckily I came to work prepared to deal with Jedi Scum!!!! 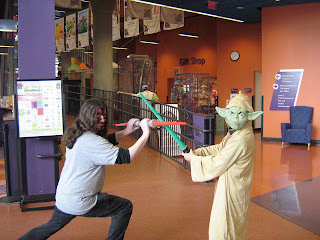 Combat most furious was soon commenced!!!!! 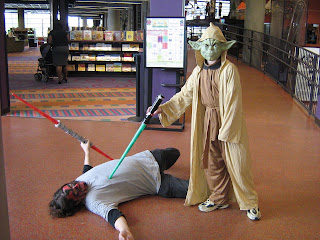 To my disgrace, I'm whupped up on most horribly!!!!! (How did this picture get in here?)


Although defeated most thoroughly and 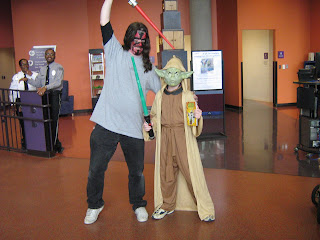 made to give Master Yoda his Star Wars: Clone Wars Adventures Graphic Novel, I still got to make fun of him when he was not looking behind his back (oops, you don't suppose he will read this blog, eh????? Better develop a quick exit strategy from library in case he does, but I want to make it clear I'm not scared or nothing. Yea that's the ticket, gulp!).

Well enough of that Humiliation, er, I mean Heroism on my part. Let's talk about some cool books I have read recently:

No More Dead Dogs by Gordon Korman - This is officially one of the funniest books I have ever read!!!! Now you may think from the title that this book is going to be sad or certainly something depressing, but brother you could not be more wrong. This book is told through multiple characters perspectives and these main characters are Wallace Wallace (no this is not a typing mistake; Wallace is both his first and last name) - an unlikely/reluctant football hero, Rachel Turner - head of the Drama Club, Trudi Davis - Rachel's boy crazy best friend, Mr. Fogelman - Wallace's eighth grade English Teacher and others. It all starts out when Wallace Wallace, who for reasons you will learn, writes an honest book report about Mr. Fogelman's favorite book Old Shep, My Pal. Basically he writes that he hates the book. Why do you ask? Here is a short excerpt from the book concerning this event that gives you a taste of the humor that this book is infused with:

"I knew Old Shep was going to die before I started page one."
"Don't be ridiculous," the teacher snapped. "How?"
I shrugged. "Because the dog always dies. Go to the library and pick out a book with an award sticker and a dog on the cover. Trust me, that dog is going down."
"Not true!" stormed Mr. Fogelman.
"Well," I challenged, "what about Old Yeller?"
"Oh, all right," the teacher admitted. "So Old Yeller died."
"What about Sounder?" piped up Joey Quick. "And Bristle Face, " added Mike "Feather" Wrigley, one of my football teammates.
"Don't forget Where the Red Fern Grows," I put in. "The double whammy - two dogs die in that one."
"You've made your point," growled Mr. Fogelman. "And now I'm going to make mine. I expect a proper review. And your going to give it to me - during detention!"

If only Mr. Foelman knew what series of events he was putting in motion by putting Wallace Wallace in detention, he would have had serious second thoughts. Yet if he did not, the seriously comedic events that follow would never have occurred. If you like to laugh out loud, this is definitely the book for you. Man, I'm still laughing about different parts of the book just thinking about them. Two Thumbs Up!!!!!!!!!!!

Guan Yu: Blood Brothers to the End - A Chinese Legend by Dan Jolly and Ron Randall - This Graphic Novel tells the story of Guan Yu, an ancient Chinese Warrior, who leaves his village and home at a young age to seek his fortune. Not long after leaving his home he encounters two men, Liu Bei and Zhang Fei, at a tavern. The two men had just begun recruiting men to fight a group of rebels known as the Yellow Scarves. They invite Guan Yu to join them and he agrees to help them put down the rebellion. As they talk, they know that something very special is happening and start to feel a special kinship with one another. Before leaving the tavern the three men agree to be Blood Brothers and to never abandon their brotherhood. They put down the Yellow Scarf Rebellion that threatened the Chinese Government and go on to have many adventures together and separately. Guan Yu, especially, goes on to accomplish many great feats and becomes renown throughout China. So much so, that many years after his famous death (read about it), he transcends mortality to myth becoming a Chinese God of War. His mythological status also comes to represent Honor, Righteousness, and most of all Brotherhood. This is a really good read about a real warrior who achieved greatness and beyond through honor and integrity. I found this to be both an interesting and fun book.

Take it easy all and be nice to each other,

Hummmmmmmm! I WILL be watching and reading this Blog. If I have to come back and put you in your place again I will, be you assured of this Sith!
Until then I can depend on other creatures to keep you in line.

No More Dead Dogs is about a completely honest boy, named Wallice, who becomes a football star just by pouncing on the loose ball for the winning touchdown. But when his English teacher asks him to write a possitive report on the book Old Shep, My Pal, he doesn't, and he's sent to detension until he writes. This is bad news for the football team, after three loses, some players are getting angry. After a while, he actually begins to enjoy watching the actors reherse and begins to make suggestions that turn the play around. The longer he stays though, a mystery person starts ruining the play, and people begin to point fingers at Wallice. Soon after they find all the scripts shredded to pieces, wallice isn't allowed anyware near the play. Meanwhile, on the night of the play, the mystery person attaches a bomb to Old Shep and Wallice is the only one who knows about it! Will it be too late to save the play?
This is a great read for all mystery lovers. Yet, it does include some curse words, so I'd advise it for eighth graders and above. Although it has some language, this book has kept me reading it from sunrise to sunset, until i finally figured out who the mystery person was and finished it. It has the chapters set up so that it switches to who's point of veiw your seeing which I thought was great so you got everybody's feelings. Overall this book was one of my favorites and I would rate it on a scale of one to ten, about an 8.4.