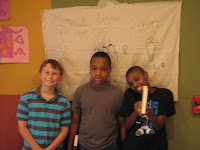 Hey, guys, it's Carl and here are Ethan (aka dragonslayer), Leland, and Noah, our faithful reader guys and members of our City of Ember Boys' Book Club, standing in front of the banner they made for our club. We had a really good time at our meeting last Saturday. The book was The Prophet of Yonwood, the third in The City of Ember series.

called Hide the Bomb. Since this book talks a lot about terrorists and world-wide war, we divided the guys into Terrorists and Agents. The Terrorist hid a picture of a bomb in the room and the Agent had 2 minutes to find it. A lot of the Agents found the bomb (note to players: laughing when an Agent gets near your bomb is a sure giveaway!) but the Terrorists got smarter and sneakier with each round. Everyone got a chance to be an Agent and Terrorist, even me. A lot of fun.

Then we had snacks and settled in to a really good discussion. This book was all about the world on the brink of a global war and a girl and her aunt inheriting an old house in a small town. We talked about what life would be like if a world war were coming--could life go on as normal, what was life like in World Wars I and II, did the guys know anyone deployed in Iraq. (two of the guys did) As I said, it was a really good discussion. AND we had an excellent belching competition! Ethan even proved that he could burp the alphabet. Now that's what I call a GUY book club!!

The next book is The Diamond of Darkhold. We hope to have the next meeting in September and we'll be sure to announce it ahead of time.
Posted by Iron Guy Carl at 3:05 PM