Hello all in the Land of Blog, tis I, The Deadly Martial Artist Librarian Darth Bill!!!!! I am master in the use of the deadly art called "Bookends of Death!!!!!!!!" Check it out: 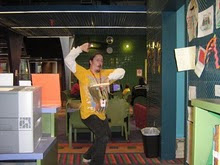 Well, instead of writing a holiday list of things I want, I thought I would write a list of books I hopeto get to read soon. So, here they are:

Double or Die: Young Bond by Charlie Higson;
Freefall by Roderick Gordon & Brian Williams;
The Brixton Brothers: The Case of the Case of Mistaken Identity by Mac Barnett ;
The Elves of Cintra by Terry Brooks (this is an adult classified book, but it's really a great book in a fantasy series that has everthing from Elves, Trolls, Druids and Dwarves to awful really frightning monsters and major bad villians);
Salt Water Taffy, Vol. 2: A Climb Up Mt. Barnabus: The Seaside Adventures of Jack and Benny by Matthew Loux.
Well enough of that let's talk about some cool recent reads: 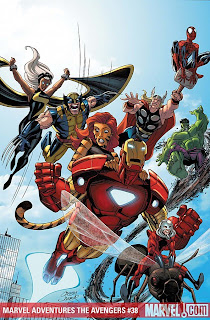 Marvel Adventures: The Avenger - Invasion by Paul Tobin, Dario Brizuela, etal - This most excellent of Marvel Adventures Avengers' presented in Graphic Novel (GN) Format collects issues 36 - 39 of the comic. My favorite story of the four collected involves the Avengers taking on the the equivalent of the Avengers from the 1950s, The Invaders (The Original Human Torch, Toro, The Sub-Mariner and The Whizzer), with the assisitance of two out of time Invaders Miss America and Golden Girl. 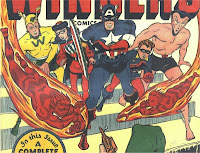 The Invaders - Old School
(but still very cool)!!!!
The Invaders have appeared in our present and are attacking the Avengers (in this story made up of Captain America, Spider-Man and Wolverine). To make matters even more confusing, Captain America belongs to both these Teams (for those of you who do not know about Cap, he is from the past but was thrown into the future---there are stories out there that explain all this). Who will win in this epic clash? Why are the Invaders fighting the Avengers? Whose side will Cap take? Read the story and find out. Other stories included in this GN include such heroes, besides those already mentioned, as Storm, Iron Man, Tigra, The Hulk, Ant-Man and Luke Cage taking on some most vile villians as an Evil Genie, The Mandarin and The Leader among others. Got to agree with Carl on this one. Really fun stuff so give it a try!!!!!!!!!!!!! 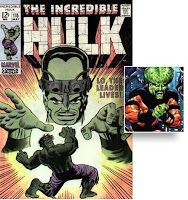 Marvel's King of The Seven Seas The Sub-Mariner --->

<---The Leader- Long time villain
of the Hulk!!!!
P.S. I'm glad The Carlman enjoyed it as much as I did. I am a Sith but even Sith have moments when they can be kinda nice. 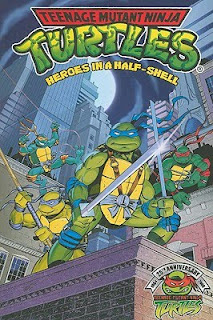 Teenage Mutant Ninja Turtles: Heroes In A Half-Shell by Michael Dooney - Cowabunga, dudes!!!! Did you know "The Teenage Mutant Ninja Turtles" turned 25 years old this year? Dudes, it's time to party with some pizzas and tasty beverages!!!!!! Also to celebrate the turtles' birthdays (Michelangelo, Leonardo, Raphael and Donatello), this awesome Graphic Novel has been put out and it rocks, dudes!!!!! It pits these Ninja Turtles, with the aid of their teacher and mentor Splinter (once a human master of martial arts turned into a man-sized rat) and a human named April (a reporter), against evil bad guy martial artist Shredder and his minions (Be Bop - a cross between a human and a wild boar, Rock Steady - a cross between a human and a rhinoceros, the living brain Krang and more). Believe it or not, I have an issue of the very first issue of "The Teenage Mutant Ninja Turtles. So I guess that makes me 25 years + ? years old.

<---Michelangelo - Master in the use of Nunchakus!! 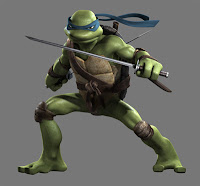 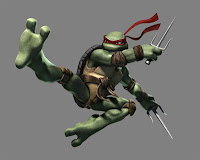 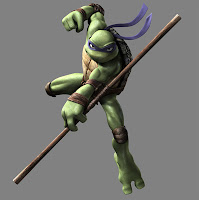 Donatello- Master of the Wooden Staff!!

Well that's all I got guys. If I don't post again until after Christmas, Happy Holidays all!!!!!!