Hello all in the Land of Blog. Darth Bill, the Sith with the mostest, has returned from deep space with some cool stuff to share. First I would like you all to know that on Wednesday, June 24 at 6:00 pm Jana Guitar will be putting on a Manga Drawing Workshop:
Are You Interested in Manga?
Would You Like to Learn to Draw Manga or Improve Your Manga Drawing Skills?
Are You Between the Ages of 8 to 12 Years Old?
If You Answered Yes to all these Questions, do We have a Program for You!!!!! Jana Guitar will be visiting ImaginOn on Wednesday, June 24 at 6:00 pm to present a Manga Drawing Workshop. If you are interested in attending all you have to do is call 704-973-2720 and register!!!!!!!! A great time is assured for all!!!!! 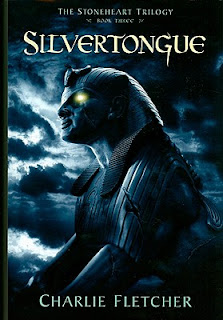 Silvertongue (Book Three of The Stoneheart Trilogy) by Charlie Fletcher - Just finished this one and all I can say is: "Wow, what an exciting ride!!!!!" This volume starts off with the Walker apparently vanquished only to be replaced times 2. The Darkness trapped in the London Stone has escaped and from another Dark Dimension, unwittingly released by George and Edie, the Ice Devil has flown into our world making time stop, all people disappear and bringing a ton of snow and darkness into the world. To make matters worse the Ice Devil is calling all Taints (evil statues such as gargoyles (for the most part), dragons (also for the most part) and other monstrosities) to itself to make war on all Spits (good statues such as the Gunner, the Red Queen, the Lionheart and more). In addition to all this George must complete his quest, for he has chosen the hard way, to become a Master Maker (Magical Ability to make and heal all statues). The last obstacle he must face is a duel with the fearsome Last Knight of the Cnihtengild. Edie has her own quest to attend as she searches through time to save her mother. New characters are introduced and shocking secrets revealed as all heck breaks loose in this final volume of The Stoneheart Trilogy. Reading this book was like riding a roller coaster with action, action and more action. I really enjoyed this trilogy and can't wait to read it again!!!! It was that good!!!! You are depriving yourselves if you don't give these books a read!!!!!

If you want to see reviews of the other books in The Stoneheart Trilogy go here for Stoneheart and here for Ironhand.

Check out some actual photos of real statues some of the characters and things in the book are based on: 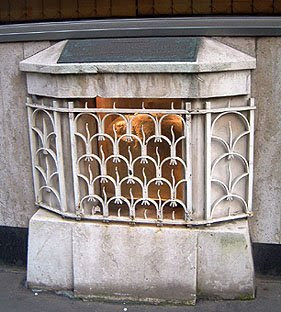 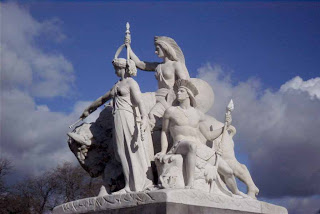 <---The Queen of America (middle) and her Buffalo 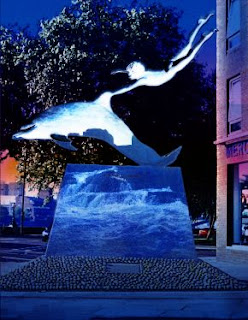 The Boy and Dolphin Statue--->

Pokemon: Diamond and Pearl Adventure, Volume 4 by Shingekatsu Ihara - I'm sorry that I have not reviewed the volumes before this one because this is a really fun Manga that I have been enjoying. The main character in this series is Hareta, a crazy kid who has the ability to form special bonds with Pokemon. He is on a quest to find the Legendary Pokemon Dialga (the Pokemon ruler of time). Unfortunately the evil organization Team Galactic also has the same goal. Fortunately Hareta is aided in his quest by his friends Jun, Professor Rowen (a Pokemon Researcher) and Mitsumi (Professer Rowen's Assistant) among others. In this story Hareta takes on Regigigas, a Pokemon with the power to move whole continents, and man it is an epic battle. Then when Hareta least expects it he is betrayed by a very close friend who may actually be more poweful than him!!!! Let the best Pokemon Player win!!!!!!!

One last note before I go; I also love The Tripods Trilogy by John Christopher. Many, many years ago these were the books that first introduced me to the wonderful world of Science Fiction. Really good stuff!!!!

Well that's all for now. Until next time peace everyone,