Sophia Sends Us Another One--About the Island Trilogy! And Jason Writes About the Blackboard Bear

Hey, everyone, this is Carl. We have a new review from Sophia, that nice and intelligent girl from Metrolina Regional Scholar's Acacemy. I thought she had tried a hostile takeover of our blog, but as you will see, I was mistaken. She didn't want a takeover; she only wanted the free books! Well, as we've said before, we don't mind when girls write in; in fact, we welcome them and give them the greatest honor we can bestow by making them Honorary Guys!! And to show how fair, impartial, and generous we are, I'll also give this review to Ellen the Excellent, who started the very-awesome Girls Read Girls Rule (the World) blog. You'll be the first one to have your review appear in two blogs!!!


This book is by Gordon Korman. Even though this isn't about the book, I need to explain something to you guys. OK, so I'm a girl, that doesn't mean I want to take over your website. I just think your website is totally awesome! I love reading. Now, Shipwreck is the first book in the Island series. It's about a bunch of of boys and girls who were on a boat, then the boat got in this storm,and the six kids got washed up on a desrted island.


I think you should read this book, it's awesome and I love it!! Gordon Korman is a very good writer and I think you shou;d read all his books. The ones I like his Island series, Dive series, and his Everest series.


Most likely they're at a library, but if you want, you could also buy the books. They're cool. In the Island series, there are two girls and four boys. In the next book, Survival, they have to survive on the island until the can Escape, book three. Gordon Korman writes awesome books!!


Thanks, Sophia, and thanks for the compliments about our blog. We think you're pretty awesome too. A lot of kids have been reading the Island series lately; look at the posts from 11-6 and 10-29 to see what Koko B. Ware from the Guys Read blog had to say about it. BTW, I'm sending out a word of sympathy to our good friend Koko B. Ware--he lost his grandmother earlier this month and we know that must be hard for him. Take a moment and send a comment of sympathy on his post about it.
(PS--Gordon Korman really is a good writer. If you'd like to see other things we and your fellow readers have said about his books, click on the label at the bottom of this post that says "Gordon Korman")


And here's one from our new friend Jason: 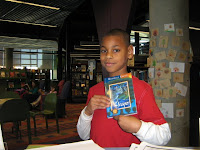 
And thanks to you, Jason! Here's a picture of him with his free book. Now I have to say that Jason outsmarted us--he wrote a review of a picture book!! I did tell him yesterday that he coudl get his free book if he wrote a review, so he wrote one right here in the library! Of course, I didn't say what kind of book it had to be! But I did tell him afterwards, as I'm telling all you out there, that your reviews need to be about chapter books or graphic novels or nonfiction (of more than 32 pages!) or biographies (ditto!)--in other words, you all are old enough to handle longer books! So don't just run in here or Matthews, read some picture book in 5 minutes, and expect to get your free book!!! To tell the truth, Jason didn't really try to trick us--he really didn't know.

And we gave him credit for making a good effort. Besides, I'll Never Share You, Blackboard Bear by Martha Alexander is a good story about loving something so much that you don't want to share it and what happens when others ask you to share. It's good for young kids and older readers too. In fact, once I recommended a picture book to a grownup.

Not for his son or daughter, but for him!! He worked for a bank, was going to make a presentation to other bankers, and wanted a simple picture book about not giving up. So I showed him The Carrot Seed by Ruth Kraus, one of the simplest picture books I know but one of the best. And the man checked it out!
Posted by Iron Guy Carl at 9:00 AM