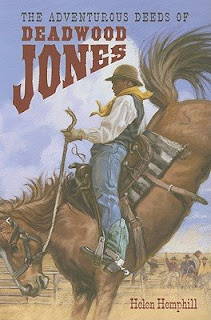 Yippee-yi-yo, partners, the Old Book Prospector sure was right about this one! The Adventurous Deeds of Deadwood Jones by Helen Hemphill is more fun than a rodeo, a shoot-out, and a saloon fight all rolled together! Thirteen-year-old Prometheus Jones and his eleven-year-old cousin Omer, both African-American boys living in Tennessee after the Civil War, have just won a horse in a raffle. A couple of racist guys refuse to believe that two black boys could have won a horse and so cause a lot of trouble--so much that Prometheus and Omer have to hightail it off to Texas, where Prometheus thinks his father might be living. They need money and join a cattle drive from Texas to Deadwood, South Dakota. The West is a beautiful but harsh and unforgiving land, however. If you're not careful every minute, bad things can happen. Even something as simple as crossing a river can mean disaster. And bad things happen in this book But there's also a lot of fun and adventure here. You've got encounters with the Pawnee and Sioux Indians, a jailbreak, the shooting match to end all shootin' contests, plus some unforgettable cowboy characters like Beck, the trailboss, Nack, and Rio. So saddle up, cowpokes, and enjoy this wild and exciting ride! Yeeeeee-haaa!!!
Carl
Posted by Iron Guy Carl at 4:15 PM