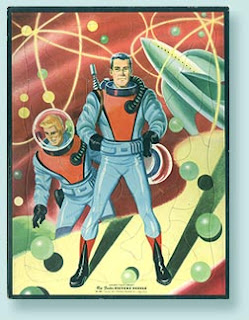 Commander CARLMAN here, guys. Ever since telling you about that wonderful book, Space Cadet by Robert Heinlein (click here to see the review), I wanted to brush up on my knowledge of the Solar System so that I wouldn't get lost between Mars and Neptune. I've been fascinated with space and the Solar System ever since I was a CARLBOY, so I looked to find some the latest info and, man, did I ever find some good ones!

The first is Stars and Planets by Dr. Mike Goldsmith. It has a lot of good basic information on all all the planets plus fascinating stuff like Space Clouds, the Big Bang and the Big Rip, space pioneers. designs of future space exploration ships, and buildiong space stations. PLUS, every section gives a link to a website realted to that subject!! For instance, the section on Mars takes you to
http://www.marsdaily.com/
and pictures of the Red Planet. (be warned--even though this book is pretty new, some sites can change, move, or disappear and some sites will have those annoying pop-up ads and other advertisements) But even with that, you'll find some extremely good sites and good information. This book is great for anyone who's learning about the solar system for the first time or long-term space fans. PLUS, you don't have to sit and read it all the way through--you can pick and choose the sections you want. Commander CARLMAN likes to look through this one while refueling at the Jupiter Station.
Since I mentioned the Red Planet, have you wondered if there were life on Mars? Or ever had been? Then you're in good company. A lot of our best wrtiers have wondered and written terrific books about Mars. H. G. Wells and The War of the Worlds. Ray Bradbury and The Martian Chronicles (one of the ALL-TIME BEST BOOKS EVER). Edgar Rice Burroughs, the Tarzan

author, wrote a whole series of books on John Carter and his adventures on Mars. If this idea has ever interested you, then you ought to read Mars and the Search for Life by Elaine Scott.

The author gives a lot of interesting background on the discovery and early study of Mars, especially the "canals", and goes on to tell the story of sending space probes to explore, analyze, and photograph the Red Planet. Then she goes on to tell about possible manned trips to mars and how some people are practiciing NOW to go there! Really intersting!! And the chapters on landing probes on Mars had me turning page after page, dying to find out what would happen next! Go get this one, guys!!

The best part of Space Cadet took place when the main characters crash-landed on Venus. A lot of people speculated what might be under that unbroken cloud cover.some said there was an enormous planet-wide ocean, like C. S. Lewis did in Perelandra. Others, like Robert Heinlein, thought there a lot of marshes. The truth comes out in Venus by Ron Miller. Find out what Venus is really like and why space probes get destroyed in 15 minutes whenever they land on the surface! This one kept me turning pages too.
Both the Mars and Venus books have good glossaries (definitions of terms) in the back as well as list of books and websites. This is good because, once you start learning the solar system, you want to find out more and more.
Commander CARLMAN signing out and saying,

"Look To The Stars!" 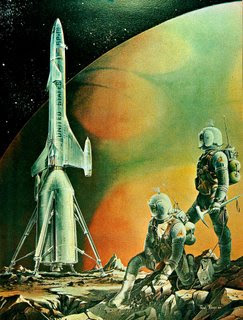